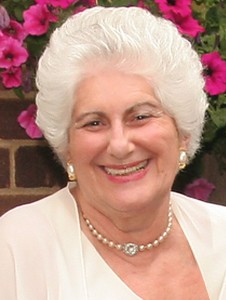 Sally was born in the legendary Fitzroy Tavern in 1936. Annie her mother had helped her father Pop Kleinfeld since he became the first license in 1919. After Annie married in 1934 Annie and Charlie Allchild became the licenses. The Fitzroy was Sally’s home for the first 17 years of her life. From her early days she became involved in the charity work of the Tavern. She suffered her first major illness while living at the Tavern; much of her schooling was at St Georges School in Harpenden where she was sent during the war, after which she qualified as a Beauty Specialist. Sally married Arthur Fiber in 1957 and they had two children who today are both happily married producing six wonderful grandchildren.

Sally remains involved in voluntary work with the League of Jewish Women; She formed her local Northwood group in 1960, is still actively involved on the committee and was made an Honorary Life member of the League’s Council in 1983 for her work.

In spite of having to cope with the consequences of getting MS in the 70’s and surviving the most virulent form of the horrifying infection Necrotizing Fasciitis more commonalty know as ‘the flesh eating bug’, Sally wrote and had published her story of The Fitzroy, The Autobiography of a London Tavern.

The loss of her husband Arthur of 52 years in 2009 has not stopped her enthusiasm. Sally has been encouraged by the many who have contacted her for information since the publication of her book; the great interest it has created, the amazing history of the Fitzroy with its historical ongoing story made Sally feel the time was ripe to re launch her book again. Peter Deluliis’s the current Fitzroy’s manager’s fervor for this tavern together with Samual Smith’s great plans in 2015 to bring the tavern back to its golden era of the 30’s; and with the launch of an exciting new Musical production by Celine Hispiche and based on one of the early Fitzrovians life, Betty May known as The Tiger Woman, who befriended Sally’s mother and used to help with the children’s outings, is extremely thrilling.

Celine Hispiche and Edwin Philpott of DeSapinaud Productions are starting the Fitzroy charity again. Sally is most honoured to be asked to be the Patron of the new charity FITZROVIAN PENNIES the pennies that came from heaven.