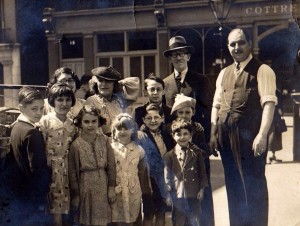 Annie Allchild, Betty May, a local Councillor and Charlie Allchild with a group of children ready for their outing.

Long has Fitzrovia been associated with some of the most creative & entrepreneurial people in London. Great artists, writers, actors, architects, physicians, engineers, philosophers, composers, musicians, film makers, broadcasters, photographers, art directors & designers, fashionistas and foodies have all been involved with this immensely creative habitat and culturally rich environment.

In 1923 Juddah ‘Pop’ Kleinfeld of The Fitzroy Tavern decided to launch a small Charity for the benefit of under-priviledged children in the area. Those he knew had never seen the countryside or received anything at Christmas. By persuading his customers to place their small change in a paper dart and lodging it firmly on the ceiling he created ‘Pennies from heaven’. As a Charity, it collected the equivalent of over half a million pounds in its time and provided hundreds of children with some extra support they needed.